Make a gift for someone... just because you can!

You'll know by now that making is something of a illness around here! We love making and inventing though this next tutorial isn't ours to claim but we love it so much that we thought we'd share it with you.
Also because we know a lot of summer babies we thought as per usual that we'd make them their birthday gifts!
And if your lovely friend loves sewing as much as ours do then this is the bestest prezzie ever- and it works for boys too as they never seem to have sewing equipment at hand! - plus you can bookmark it for Chrimbo as it's also a good and inexpensive secret Santa gift too! 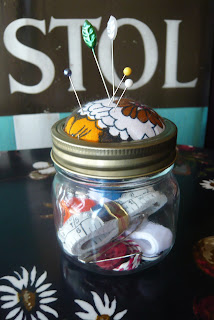 I love this idea! Going to have to pin it on my mason jar board!!