Calling all sewers... the Great British Sewing Bee needs you!

The Great British Sewing Bee is  back for a second series and they're on the hunt for talented sewers and dress makers/tailors! Could you be the next big thing in the sewing world? We love the fact that sewing is becoming so popular... it's the new baking!!! But unlike the cup cake we feel it's something that'll be around for a heck of a long time and especially now as so many people are on a budget and making and mending their own clothes! 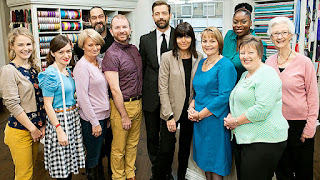 So if you feel like you could be the one, fancy a bit of crafty competition or would like to show off your sewing skills then read on...

Love Productions is on the hunt again for enthusiastic talented sewers …
We’re looking for UK-based men and women who enjoy sewing to take part in the second series of BBC2’s The Great British Sewing Bee.
So if you’re at home behind a sewing machine and you know godets from your gussets we’d love to hear from you.