Hi to everyone!
This is my first post as a guest blogger with East London Craft Guerrilla and I'm just a tiny bit nervous!  What to write about has been on my mind and for this first post I have decided to write about how I came across ELCG.

It all started with some research I was doing for an artwork I was making as part of a group exhibition.  The theme for the exhibition was 'Response' and each member of the group (there are 10 of us) had bought an item costing less than £5 which we then swapped at random between ourselves; this object was then to act as a catalyst for the creation of a new piece (or pieces) of art.  I was given an Indian silk painting showing Rama and Sita dancing.  Actually, finding out who the figures in the painting were was not that straightforward but my good friend Sophriona and her lovely Mum came to my rescue and not only identified the figures in the painting but also told me the story of Rama and Sita.  I became quite fixated with all sorts of ideas about obsessive love and romance generally; and while I was researching Love Tokens I came across the embroidered cards given by women to their sweethearts in the First World War.  These would be sent out to the men who would then stitch something else into the card and send it back as proof that they were still alive.  Then I came across the ELCG blogspot and the call out for 'Lencinhos dos namorados' and suddenly it all made sense!

I simply HAD to make a hanky for this project, but... disaster.... the only hankies in our house were some scruffy ones that belong to my husband, probably not quite the right look!  After scouring charity shops to no avail - when I asked if they had any hankies in one, the old lady behind the counter offered me a tissue! I eventually found two dainty ladies hankies in a local flea market. Perfect!  Now the problem was what to embroider on them and also (and possibly an even bigger problem) could I actually make an embroidery - I have no experience to speak of in hand embroidery and only a limited amount of experience with machine embroidery; but nothing ventured, nothing gained...plough on regardless!

The final result is two dainty vintage ladies hankies much stiffened by the addition of the embroidery motifs - not sure they'd be any good for nose-blowing or tear dabbing now, but they are OK, and for an embroidery newbie I'm quite chuffed with them.  In fact I have become so keen on hand embroidery that I've even signed up for a City and Guilds course to learn how to do it properly! 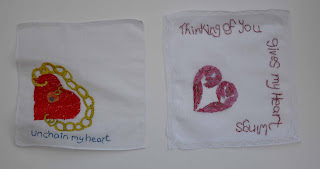 And what happened about the art work that started it all off?  I ended up with making a pencil drawing which I then scanned and printed digitally before stitching it to a screen printed background of stylised wisteria leaves using hand and machine embroidery.  It is called Wisteria Kiss and captures the moment of anticipation of that first kiss. 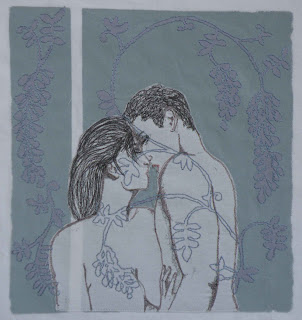 So that's it, my first post for ELCG.  Over the next few weeks I'll be making a couple more, sharing stuff about crafty things and people I know.  You can find out more about me on Facebook (www.facebook.com/paisleypedlar)
Posted by Paisley Pedlar at 20:53