I love a good charity shop find and this little egg cup was just too sweet to resist!
As it looked back at me from the charity shop shelves I thought to myself  "Really, do I need you?" but in fact it prompted me into a challenge. What could I make which would be useful, pretty, yet super quick to make? Besides for 30p I couldn't walk away. And my purchase goes to help a charity so a huge "win" all round. 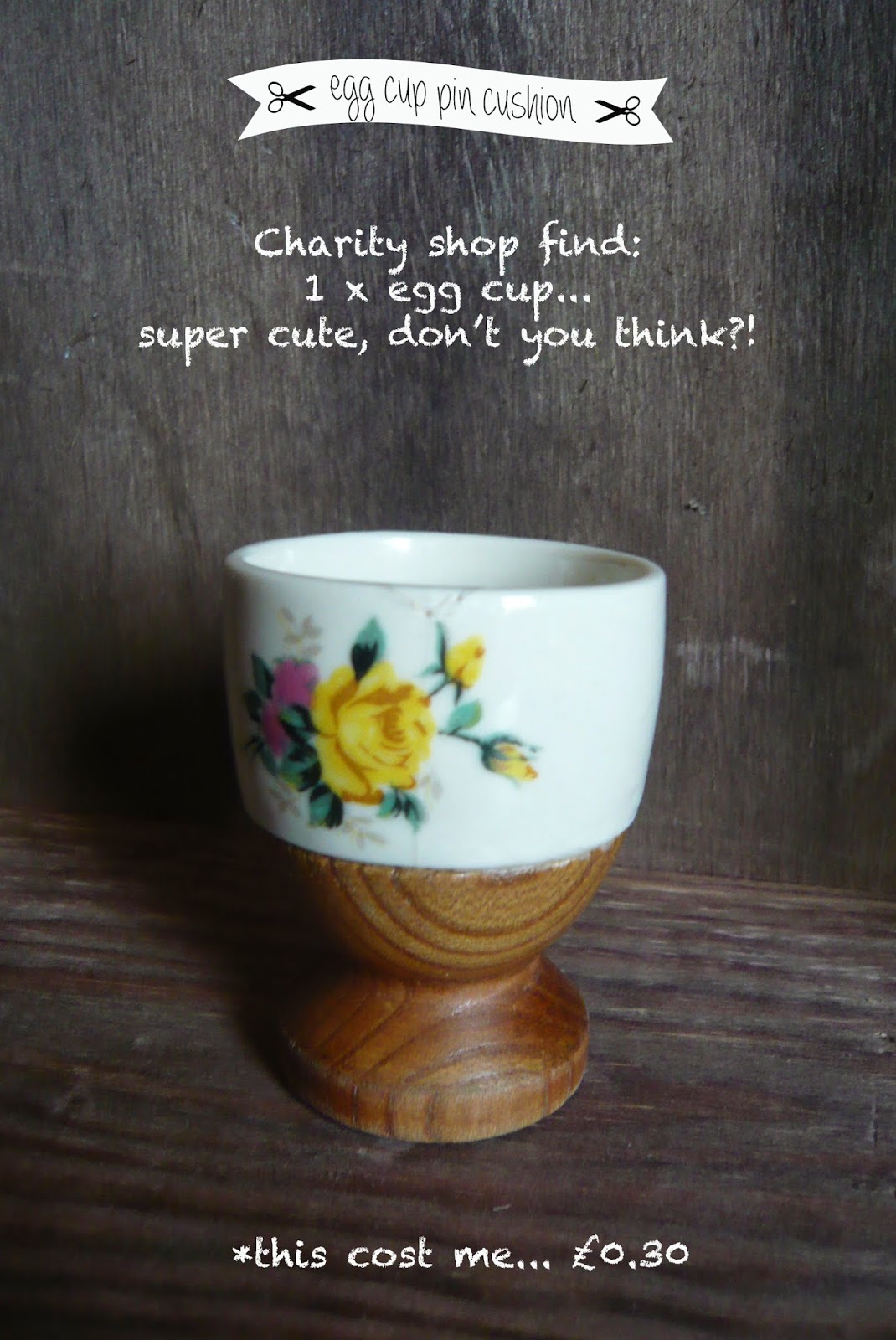 As I took it to the till in my head I was already thinking about how I could make it into something else... I mean I don't normally eat boiled eggs but I couldn't resist it's unusual mix of ceramic and wood.
Well egg cup you made me think outside the egg box and I came up with a very quick but handy tutorial which can be used on other bits of crockery too. The principal is the same. Tea cups, jam jars, coffee cups, little terracotta pots. All can be made into useful pincushions!
Yes, it's safe to say that I have a huge soft spot for pincushions. As you'll find this is not the first tutorial for making pincushions but hey... It's just one of those things that I can't get enough of! It's something so common yet not everyone will have one -and if they do they definitely will need another!- plus it's a great way to start you on your merry way into up-cycling not to mention that it also makes a great gift for anyone. I've said that before, haven't I? Ah yes, gift giving is a blast though I think I might keep mine for now but I'm sure I can find someone who'll absolutely love pincushions as much as I do!

To make this egg-celent pincushion...this is what you'll need:
• An egg cup
• Cotton fabric- we used the smallest piece from our off cut bag
• Sewing needle & thread
• Card board
• Ric-rac or any ribbon- be as fancy as you like! Another great alternative is a pom pom trim which takes this to a whole new level of kitsch!
• Stuffing

Step one - cut a small card board circle. This should be smaller then the circumference of your egg cup so it fits neatly inside. You don't want it to sit too close to the base nor the top but somewhere half way in...


Step two - cut a large circle of your fabric (about the size of a tumbler glass) and use a running stitch around the edge of your circle -about 2 cm in- to form a puff which will make your pin cushion. 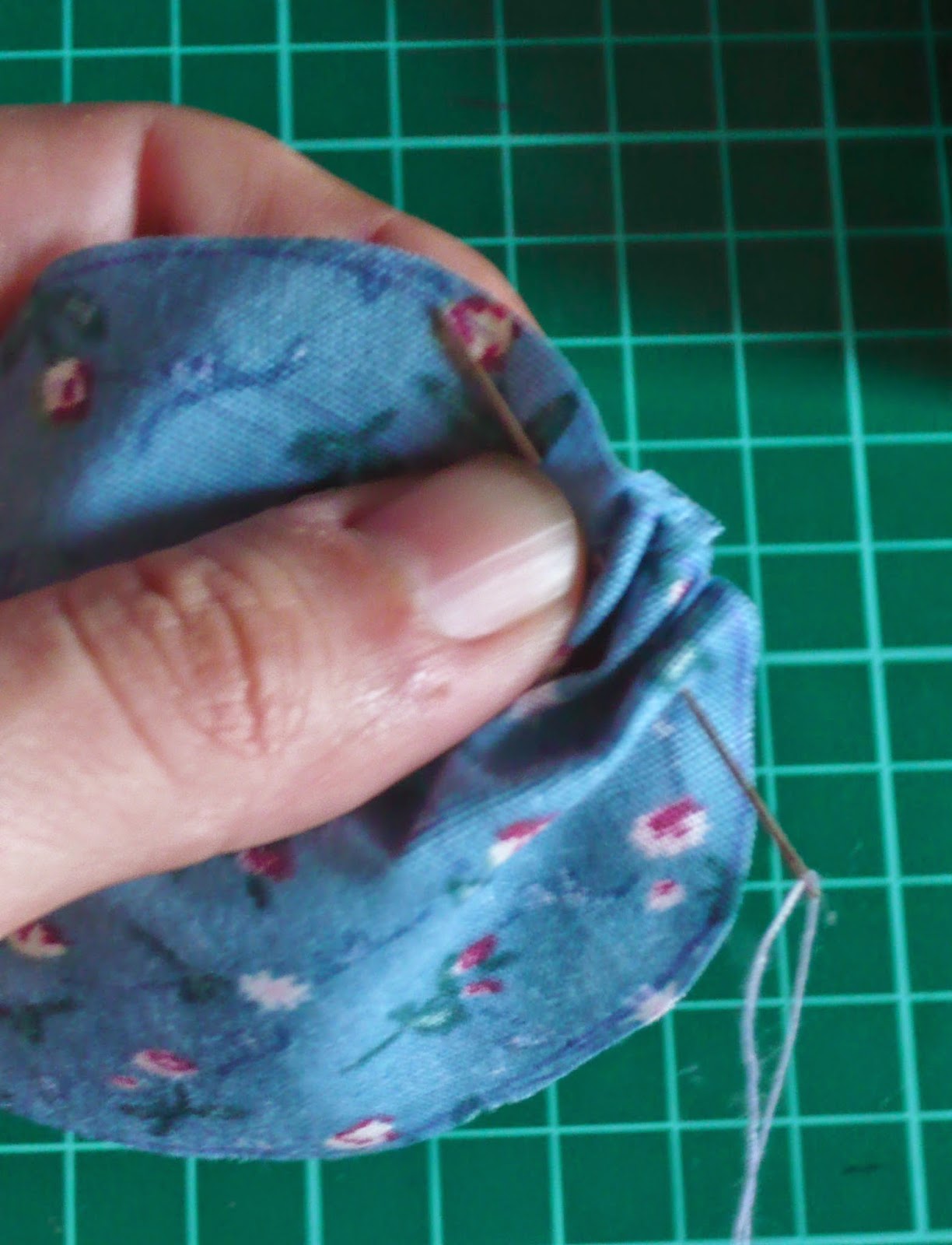 Step three - when you reach the end pull the thread to form a puff but leave enough of an opening to add the stuffing...


Step four - Fill with enough stuffing to form a plump puff, add the card board circle over the stuffing and pull tightly so to form a tight puff and to keep the card in place. It also serves as a barrier so the needles//pins don't get lost in the puff nor come out the other side! Knot the thread securely into place. 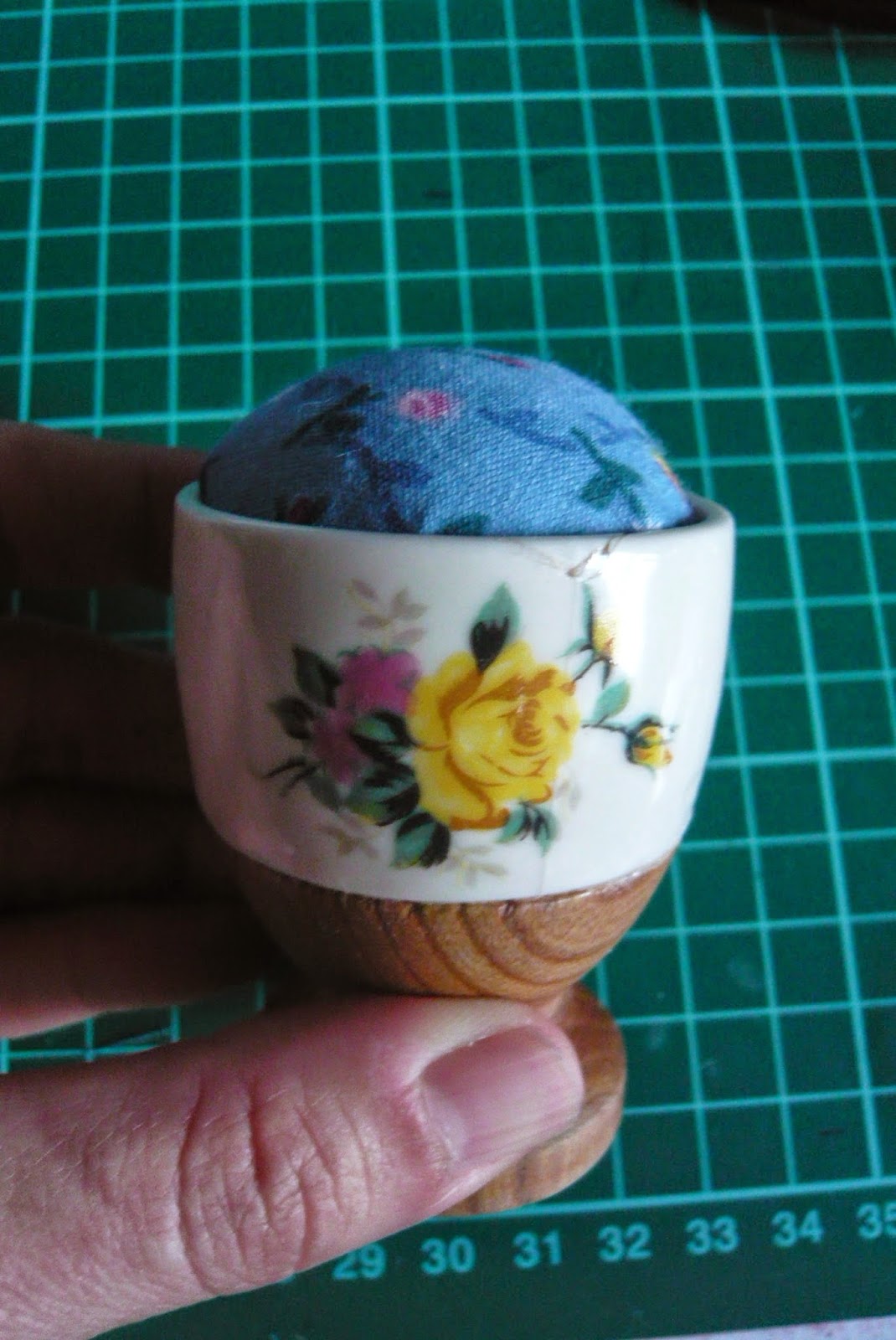 Next form a loop with the ric-rac and stitch onto the edge of the puff. Stitch the remaining ric-rac around the edge to make it look pretty! *p.s. you can add extra details like a little button, a bow etc. Totally up to you! Also I realise I haven't done it but cut a smaller circle from your fabric and tack stitch to the back of the puff so it's super neat! I shall be adding this to mine later...

Step six - Add a few bits to the inside like spare buttons, safety pins, thimble, a tape measure etc.

And there you have it! That's it. It's very easy and super cute. Plus it can be done in no time though if you take a little longer don't worry... it probably just means that you're enjoying the making process so relax and give in to the craft!!! 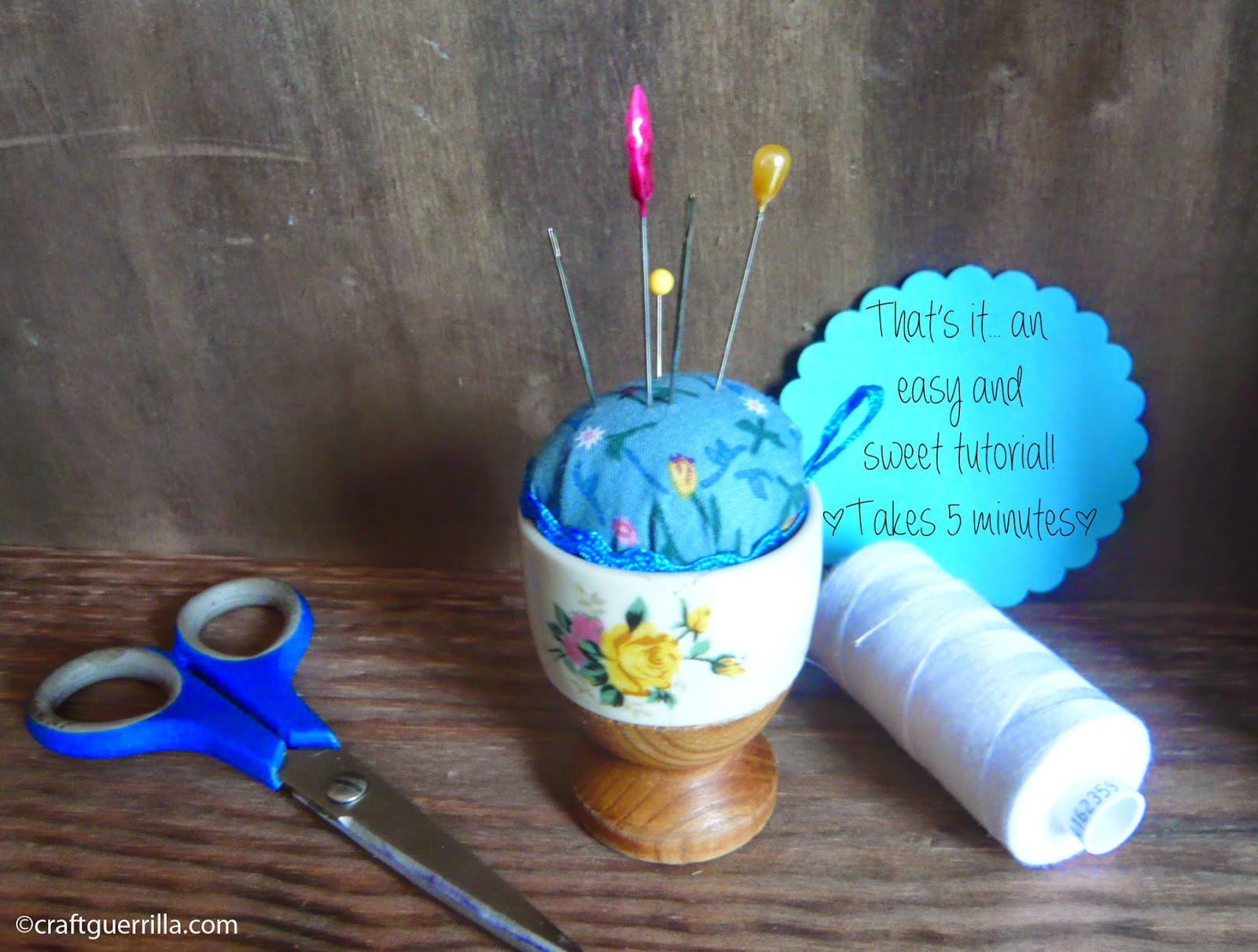 I really love this! Such a clever/cute idea!

Ingenious! I have been meaning to do something similar with crockery that was my mums :-)