I can't quite believe that it's taken me this long to visit Paris! Sure, I've been there over the past 18 years on several occasions but it's always been transitional and brief.
Because my partner and I visit his family in Northern France we often change trains in Paris yet never really stopped to look around. It's been a case of arriving in one Gare, taking the metro and leaving via the other Gare. But this really had to change as the city above was calling me... I swear I could hear it whispering my name!!!

Paris had been for me up until now a place o fabled rudeness, intense architectural beauty and a few out of date film stills from "An American in Paris". 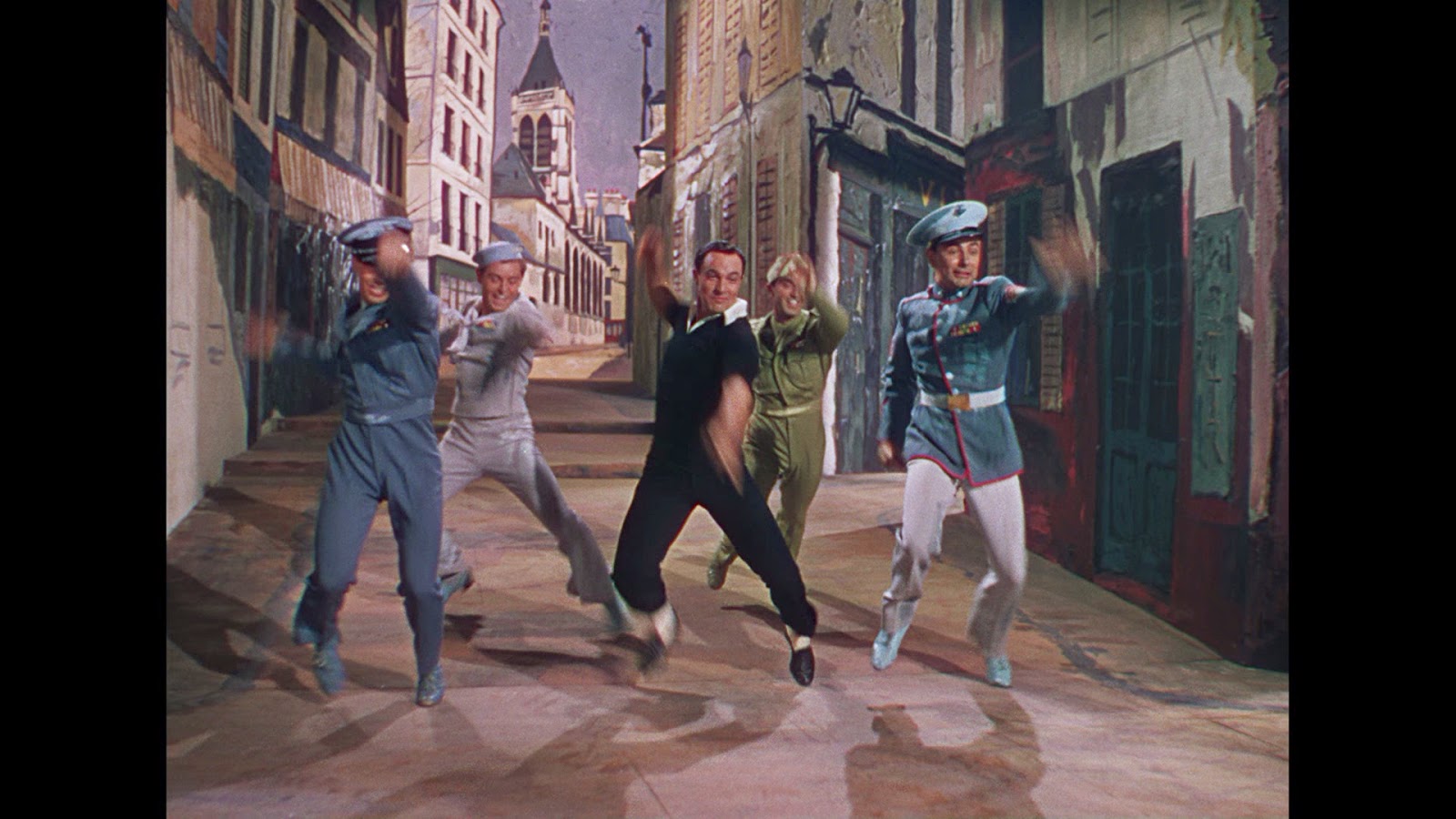 Not quite sure what I had envisaged in my mind exactly but I guessed that it wasn't all about street dancing, romance, pavement cafés that spill onto the cobbled roads, pretty little markets, patisseries filled with sweet shapely cakes and crisp fresh bread, rude locals and lots of beautifully dressed people. I can happily report that most of those misconceptions were not as far removed from reality as I had suspected they might be. You see...
actually I'm pretty happy it was a lot like that and though I say I wasn't expecting the dancing... well I lie, I kind of was hoping people would brake out in a shimmy... sadly that didn't happen but so much more did!
More chaos, more rudeness, more cafés and more beauty then I had seen on any screen! It's pretty much a love hate relationship but what I hated about Paris probably says more about me then the place itself.
It's a big city and though I am a big city gal I'm far too spoilt in London as the chaos has a rhythm and a purpose that I can deal with. Paris on the other hand has its own beat set at a different tempo. But hey I wasn't there to dance... though I did click my heels around a lamp post after a few glasses of vin rouge!


And after hearing so much about the new wave of designer makers moving into the rejuvenated city centre and hearing all about the new "it" neighbourhoods I decide that this time Paris needed a little bit more of my attention then the usual trying to catch a train race through the under belly of Paris in a ridiculous short time frame and in inappropriate footwear. Believe me it isn't easy! BUT on this occasion I had a mission, a plan and some time. And the right shoes.


Though I started off with the best intentions of smart time management with the aid of a list of places to visit, a map, wore comfy clothing, comfy shoes and had the expectation that I would get through my Patisserie list in one afternoon. It was a case of thinking to myself "Ha, easy no problemo, this is no where as big as London!"... but it wasn't as easy as that! Well... Is anything ever easy I ask you?
Oh no, of course not, it was far too big (well big enough!) to check out everything on my list -and the patisseries were dotted around Paris, sometimes at opposite ends of the city so no chance!What was I thinking?- plus I really wasn't prepared for the amazing weather so a lot of walking was done instead of the planned indoor pursuits which included using public transport. Who wants to be underground when there's perfect walking weather?

The sun was blazing and the city felt way too vast to accommodate all my whims in only 4 days. But I did find a few unexpected gems from what is reputed to be the best bakery in Paris to the best button shop with the rudest owner, a brilliant haberdashers which was packed to the brim with lovely things and lots of cute independent shops!

Sadly lots of the designer shops I had planned on visiting weren't open during our outings plus they were not too keen on having photos taken of their stock or their premises. But I find that understandable to a degree... and besides they have no idea of my intentions so even though I told them it was for a blog feature mostly smiled but firmly answered with a shrug and a swift "non". 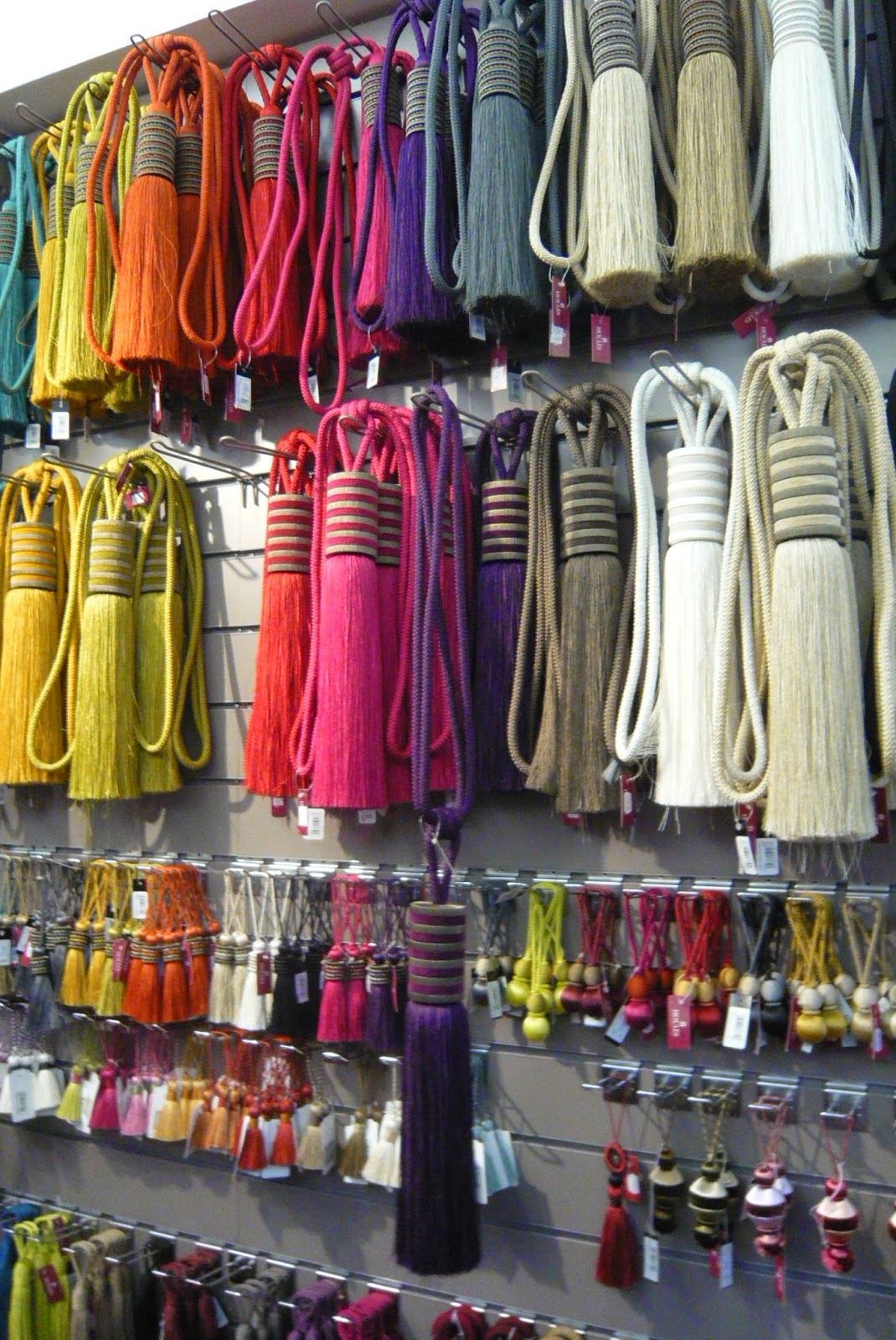 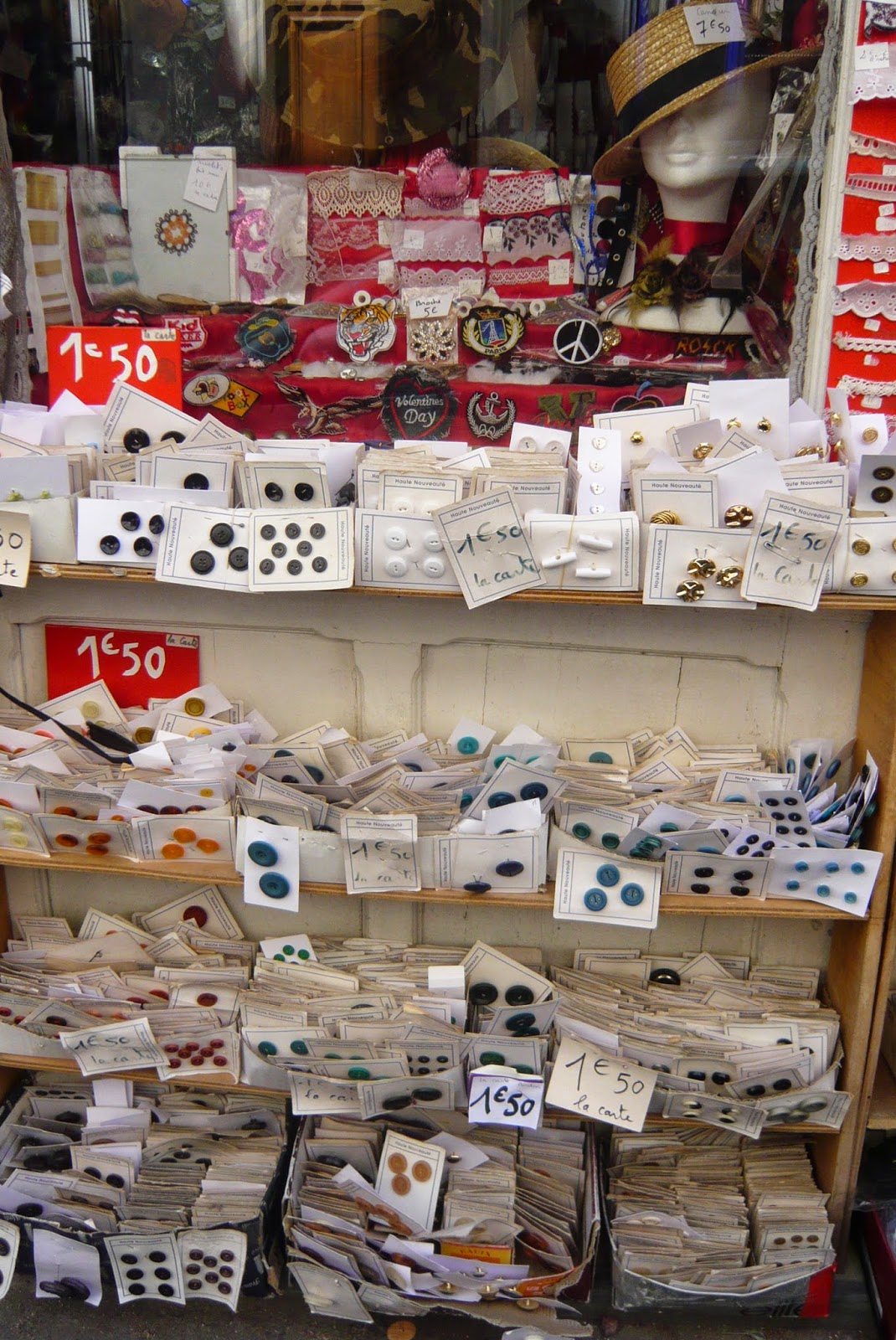 OK so it wasn't entirely possibly to document my craft hunt but I still found lots of great suppliers and fabric shops especially around the Montmartre area.
Plus we found a cracking restaurant (le petit Cambodge), a city centre oasis on the river, lots of beautiful painted typography/signs on shop fronts, the place where all the cool kids hang out, quirky galleries and that most Parisians have French bull dogs. I know... sounds like a joke but apart from one Chihuahua, hand on heart, every other dog was a Frenchie!

Unfortunately as I have mentioned  I found out that most shops -including patisseries!- didn't allow for photography so lots of the images will be of the outside rather then of the interiors which is a shame... but you'll just have to go and see for yourselves!
The initial plan of taking amazing photos to add to our page won't be as expected but regardless it was a very enjoyable craft expedition filled with pretty images that I'll keep in my memory for a long while! Plus I may add a second part with a few photos that my partner took as he is a much better photographer then me.


Taking away the "no photos please" issue I must admit that I was pleasantly surprised by the amount of designer maker shops, the variety of indie boutiques and just how friendly the new generation of Parisian shopkeepers are.
There are many interesting shops dotted around the city and not isolated to an area though the Republique area does have a higher concentration.
There you'll find an amazing little street were you can visit art galleries, bars, record shops, boutiques and a beautiful square with a selection of eateries. It's not dissimilar to Red Church Street in East London but nicer and less grimy.
Though do you think I can remember the street name?! I can easily find my way back there from the metro station but on a map I can't seem to pin point it! Sorry but I'll add it as soon as I can find it.

Like in London lots of Parisian designer owned businesses are multi functioning which means they aren't just run of the mill boutiques but also trade as bars and cafés.
I guess that trend is one we see in other cities too as it's almost impossible to solely make a living from selling hand made stock or any stock to be honest.

But one of my favourite spaces had to be Milk (mum in her little kitchen)... a café, deli and gift shop entirely kitted out in vintage furniture and crockery. Serving nice, rustic french brunch by the owner who is charming and super friendly Parisian. The stock is varied selling anything from jams, enamel ware to plastic cupie dolls and vintage post cards. The food's not expensive though as it is Paris it's not cheap either... but it's fairly priced and very delicious. But if you're less of a snack-er and fancy a bigger meal then head down to Lucky Luciano's in the Château D'eau area. It's a fantastic pizza place with gorgeous food, good wine and a buzzing atmosphere. You'll probably end up sitting in a communal table with locals like we did and I'm so glad we did as we met some awesome people. It's definitely a "locals" place so expect to exercise your French!


So if you do have a few days you need to take off or fancy a break and possess enough self control - Believe me Paris is very expensive so haberdasheries and fabric shops aren't cheap. Expect to pay a premium though in general all items are top quality so you're not being ripped off as such but prepare to cry a little every time you open your purse!-  then please do visit but go with time, a list of places to check out, some cash, an open heart and an idea of things you want to do. *Note: Eating cakes can be classed as "something to do", non?! 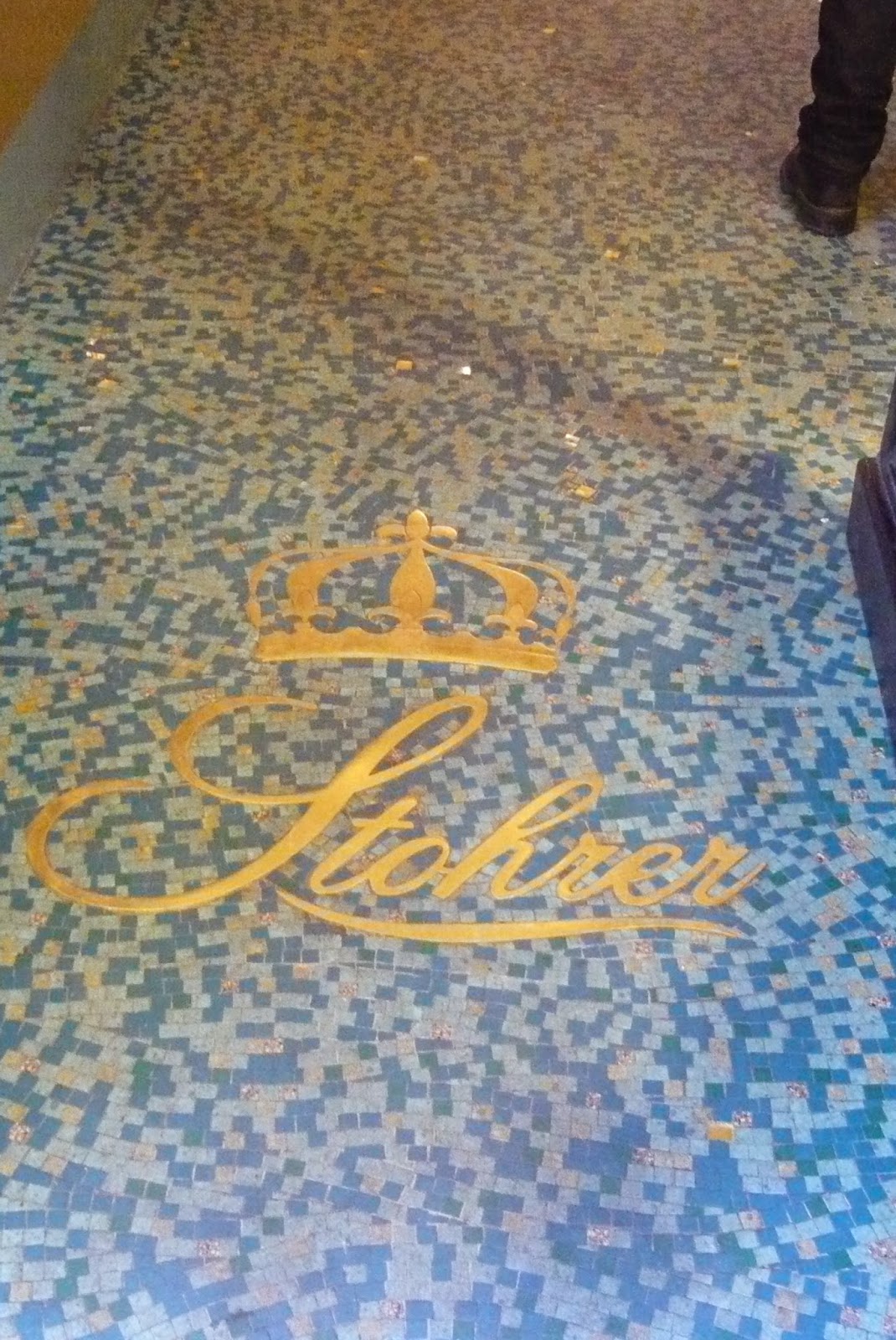 All in all I did enjoy my time there... it was a feast for the eyes. Too many beautiful things to see and too many cakes to drool over. Ha, I can promise you that I didn't even try as many as I had thought I would have. Which kind of leaves me sad but my hips and belly are not.

However a massive bug bear was the over use of English. I was surprised that many indie shops had their names in English and even resorted to the use of puns which I'm sure was lost on most French people.
I can't remember what it was but it made me chuckle at first, then it left a shallow feeling of sadness in my heart. I love languages and I hate the fact that they are being swallowed up and replaced by catchy English tag lines. It's a homogenisation I'm not really comfortable with but it seems inevitable. And you can see that happening in the trendy bars and shops too... there's a certain universal look which implies "modernity" and "cool" but all it really does is make everything look the same where ever in the world you happen to visit...

And Paris is part of this crazy world where there is still lots of great places to discover, amazing food to be eaten, friendly people to meet, opportunities to practice my broken French and lots of creativity bursting out from behind the beautifully shuttered windows.
But it's a part of the planet you can't simply just rush through.
It takes time - there's so much to find at eye level, up above, underneath your feet... argh I could have done with the eyes of a spider!- and possibly it also takes a bit of acclimatising but you'll love it. Or hate it. Or like me... a bit of both! It's an enjoyable experience to say the least and now that I've seen a bit of it I can go back with the notion that Gene Kelly isn't skipping down an artist filled street but instead I will hopping along with a big fat macaroon in one hand and a bottle of rouge in the other... and if the moment takes me I might also do a little soft shoe shuffle along to this city's mesmerising beat! Ah Mr. Kelly, you'd be proud!


*Here are a few random photos of things I found and that inspired me... enjoy!*


Thanks for reading!
X
Debbie 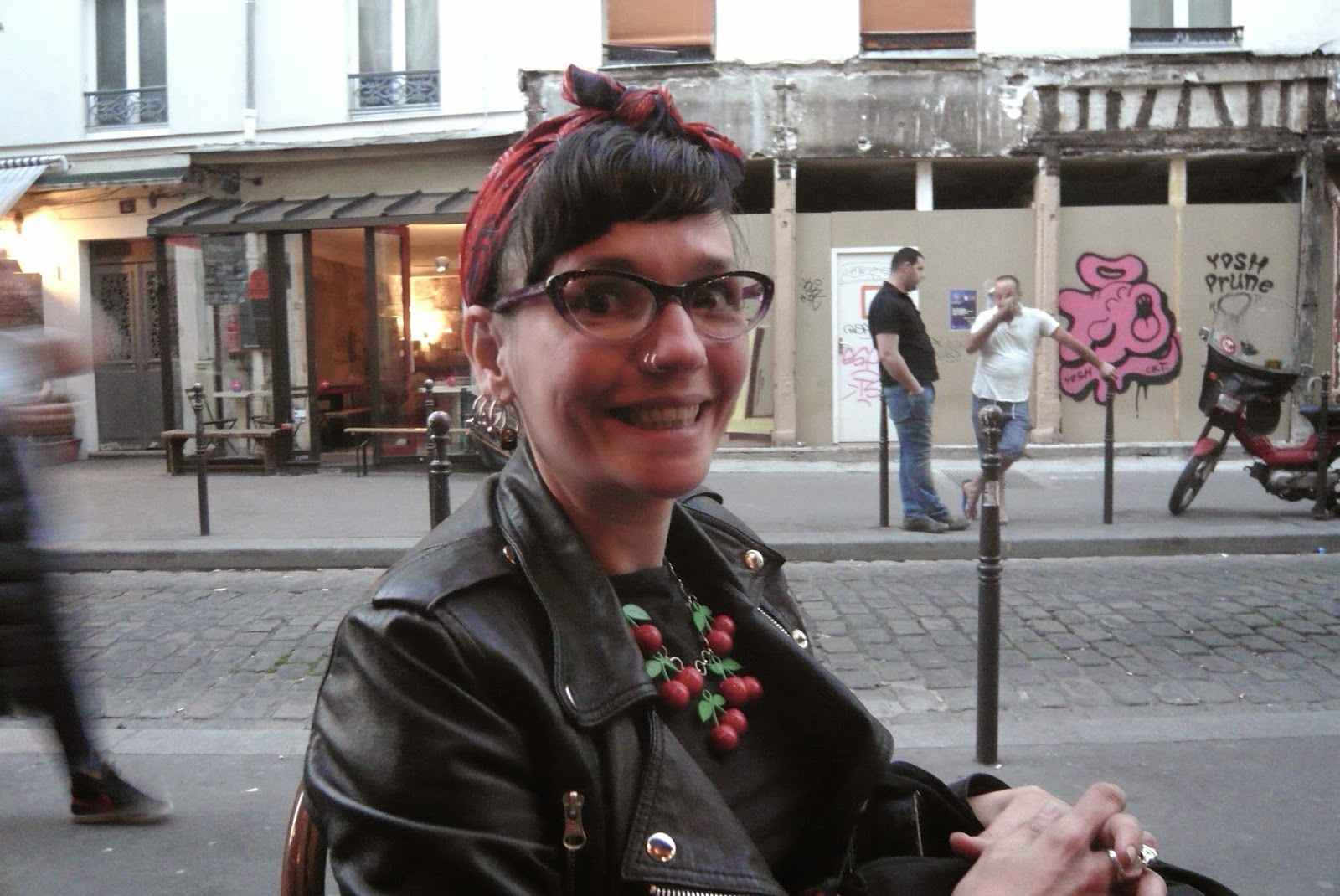 Gorgeous pictures - I love that wallpaper in the washroom! I have visited Paris twice, it never disappoints! I would live there.