Charity Crafternoon! Saturday 14th of May.... be there or be a granny square!

We've teamed up wit the legendary knitwear designer Debbie Bliss and event queen extraordinaire Sliz Gillard to host an amazing charity event in aid of the Refugee Community Kitchen!
This army of volunteer chefs have taken it into their own hands to feed up to 2000 people a day in the Northern French camps! Serving food from an old battered food van these amazing men and women have stepped up where our governments have failed!
Not content with serving gruel this troop has taken it on them selves to serve good, nutritious tasty food for their fellow men (and women!) to show that food is more then just sustenance but also about breaking down barriers and showing love and respect for others.

Keep your diary free and come on down to Walthamstow Village , Saturday 14th of May from 1 - 5 PM.
£4 entry which includes free yarn and knitting needles. 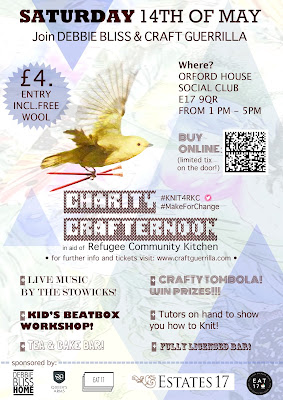 We were so moved by this project and the people behind it... hearing stories from one chef in particular, Chris Gillard, who was there volunteering made us want to do something more then just be sad or worried about it... yeah, you know what it's like... so many horror stories that it's hard not to get world crisis fatigue and just curl up in a ball so we've decide that enough was enough and that action was needed so we came together to organise something which we hope you'd also like to be a part of.

You can book your tickets here or donate whatever you can via this Evenbrite© link:

If you can't make it on the day...
Use the hash tag #Knit4RCK to join in on twitter! If you'd also like to organise your own Charity Crafternoon on the 14th get in touch as we'd love to link up and make it global!!!
But if you'd like to contribute on an individual level then don't worry either...
More info will be available soon for any of you that would like to knit squares for our blankets.
We're asking knitters (or crocheters) for 10cm X 10cm squares which you can then send in for our volunteers to sew up into blankets to then be taken to the camps in Europe or where ever they are needed!

So on the 14th of May join us for an all signing all making Crafternoon!
But it's not all about the knit... even though we'll be working on blanket squares to make much needed bedding we'll also have a Tea and Cake Bar, a fully licensed bar, a crafty tombola (win hand made prizes!), live music  from the Stowicks and even a beat box workshop From Tim "Wireless" Coles for the kiddos!

It's all about being thankful, coming together and bringing awareness to one of our lifetime's greatest humanitarian crises and feeling like we're actually doing something  proactive like raising funds to help the amazing super human people who are on the ground making life a little bit easier for others who've already been through so much.

And don't forget even if you're not in London don't worry as we'll be live on periscope (look for Craft Guerrilla)... so please do join us at the #Knit4RCK Charity Crafternoon event and lets make for change!!!

P.S.
We'd love to hear from any designer makers who'd like to donate a prize for the tombola too so... email us for further details please.

Posted by Craft Guerrilla at 23:08