Digital yarn bombing with Bulmers... all in the name of COLOURFUL living!

Bulmers cider have been around for a long time... in fact the two Bulmer brothers (The fabulously named Percy and Fred pictured below ) starting things way back in the 1890's.
Apparently, and to no surprise to us, it was all down to their mum who advised Percy to go into the food & drink business because "it would never go out of fashion"! See... mum does know best!!! 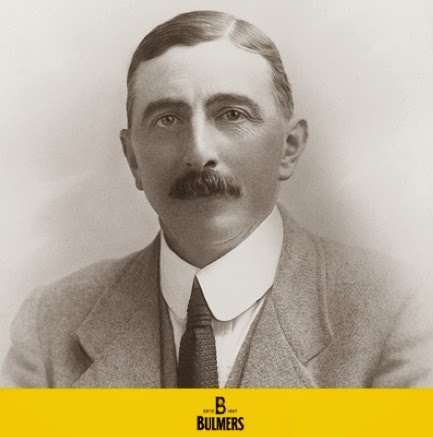 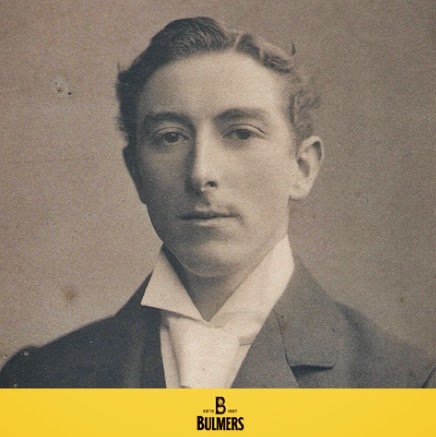 Joined by his brother they travelled through France in the early 1900's studying the process of champagne making and transferring that knowledge into cider production which then earned their libation the nick name "The English White Wine".
The Bulmers family have gone on to produce one of the UK's best loved ciders adding distinctive and fresh flavours to their repertoire... I must admit that I'm quite partial to the crushed red berries and lime cider!
Now with 7 flavours (and more to come!), the entirely British made brand is produced with a blend of beautiful and tasty apples by the hand of some genius mixologists at Broome farm. With such talent there's no surprise Bulmers continues to achieve serious accolades since the royal warrant was received from king George the V.
Wowzers that's some seal of approval!

So what does Cider and craft have in common you ask? Well they both use ancient techniques handed down through the generations so when we heard they were launching a #livecolourful digital campaign using yarn-bombing we jumped on it!


So if you'd like to get involved, win a prize on the way and do a bit of Guerrilla knitting then this is a great campaign! You can find out more via the official Bulmers Website here: www.bulmers.co.uk
As you know we love a bit of fun Guerrilla behaviour, drinking cider (responsibly of course!) and entering competitions, so what is there not to love?!

And don't forget that through yarn-bombing you'll also be doing your bit of craftivism too. It's the perfect opportunity to get your message out and about!

"Tag your photos using #livecolourful to enter the competition and show off your handy craft work!"


So here's a few easy tips on how to get started:

• Knit your apple -if you can't knit don't get in a tangle, a great alternative is a pompom- so make one or as many as you like! We encourage acts of kindness and fun, non evasive yarn bombing as a way to get some joy and colour into the greyness of winter so get to it!!! 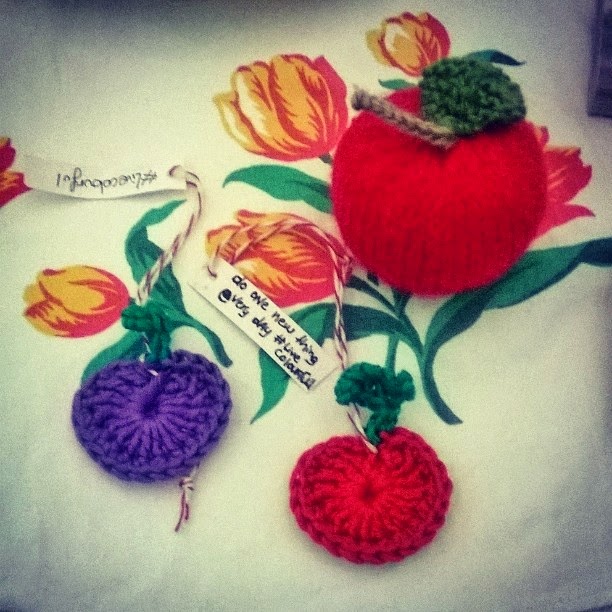 
• Write your message on a tag and secure it to your apple.... You don't have to be political, nor does it have to relate to a social issue, you can in fact just add a message wishing a bit of happiness to someone. You might have heard about Guerrilla kindness well... Guerrilla kindness is an intentional, anonymous acts of kindness performed in playful, creative ways. And it can be as simple as making someone smile with a bit of yarn-bombing. 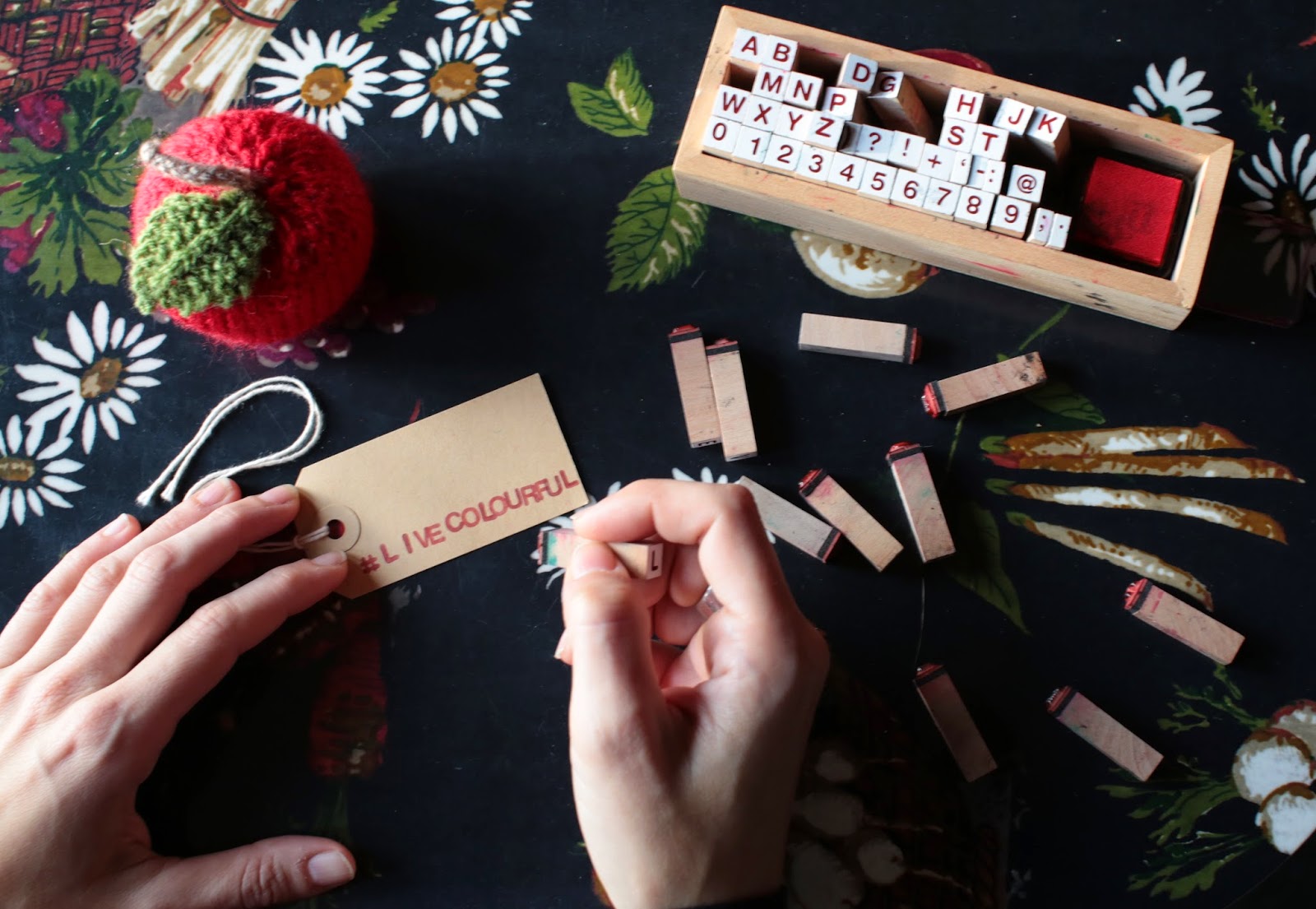 Here's the message we added to our cute apples...

• "Sew" the seeds of love and compassion and you will harvest the sweetest fruit!
• No man is an island... your actions are not without consequence. Please think before you act.

•This is a digital campaign so the yarn bombing will be in fact on line... For my entry I added my apple to a tree that looked like it needed a little loving!
You want to share  your message with people so try to photograph your tag with your message but maybe adding it to your entry too will help as you might not be able to read it in the photos!

Remember it's a DIGITAL campaign so don't forget to take it away with you... you might want to re use your knitted apple as a nice X-mas gift for a friend... the knitted apples can also make handy little pincushions! A great little stocking filler, don't you agree? 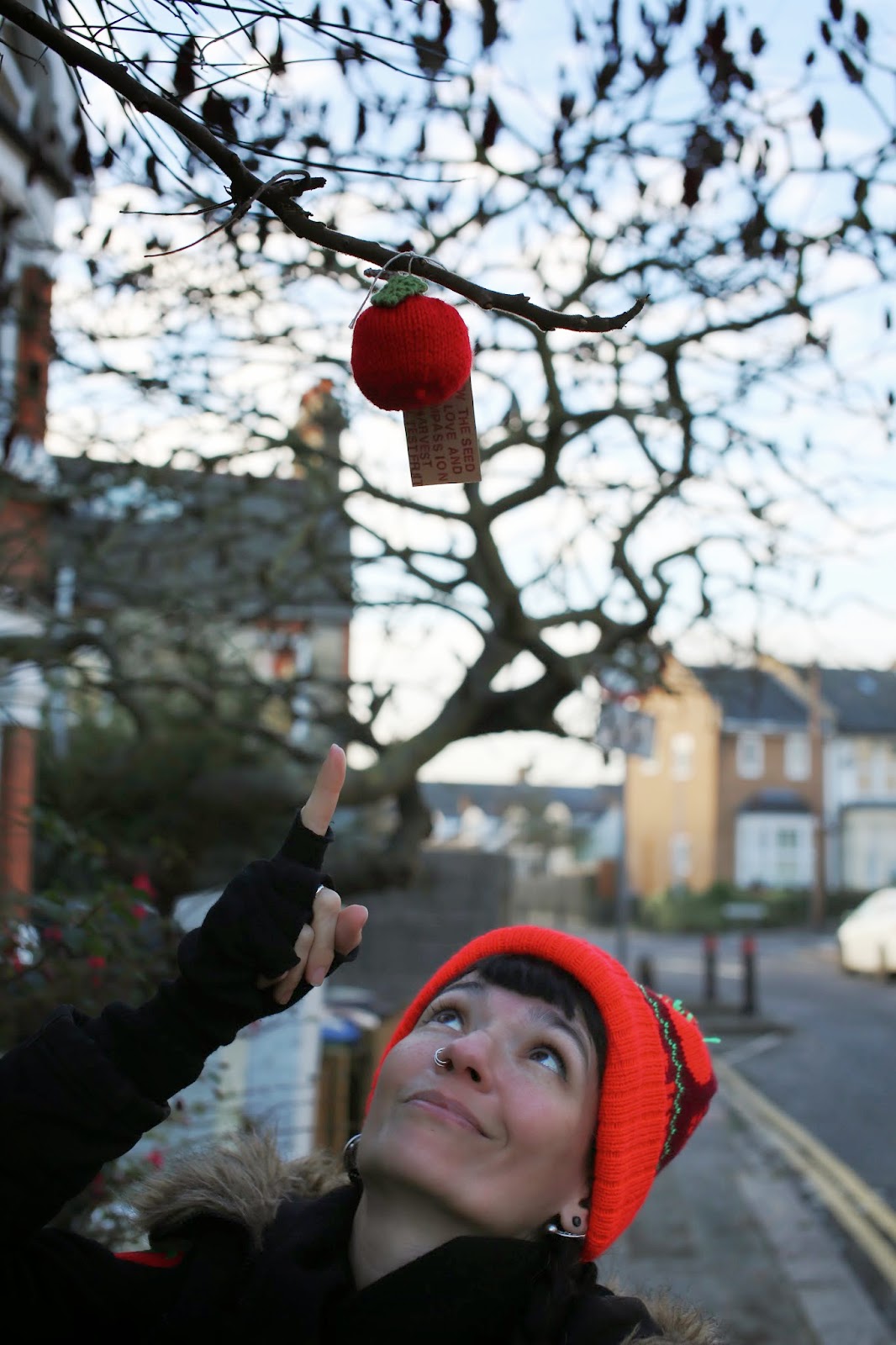 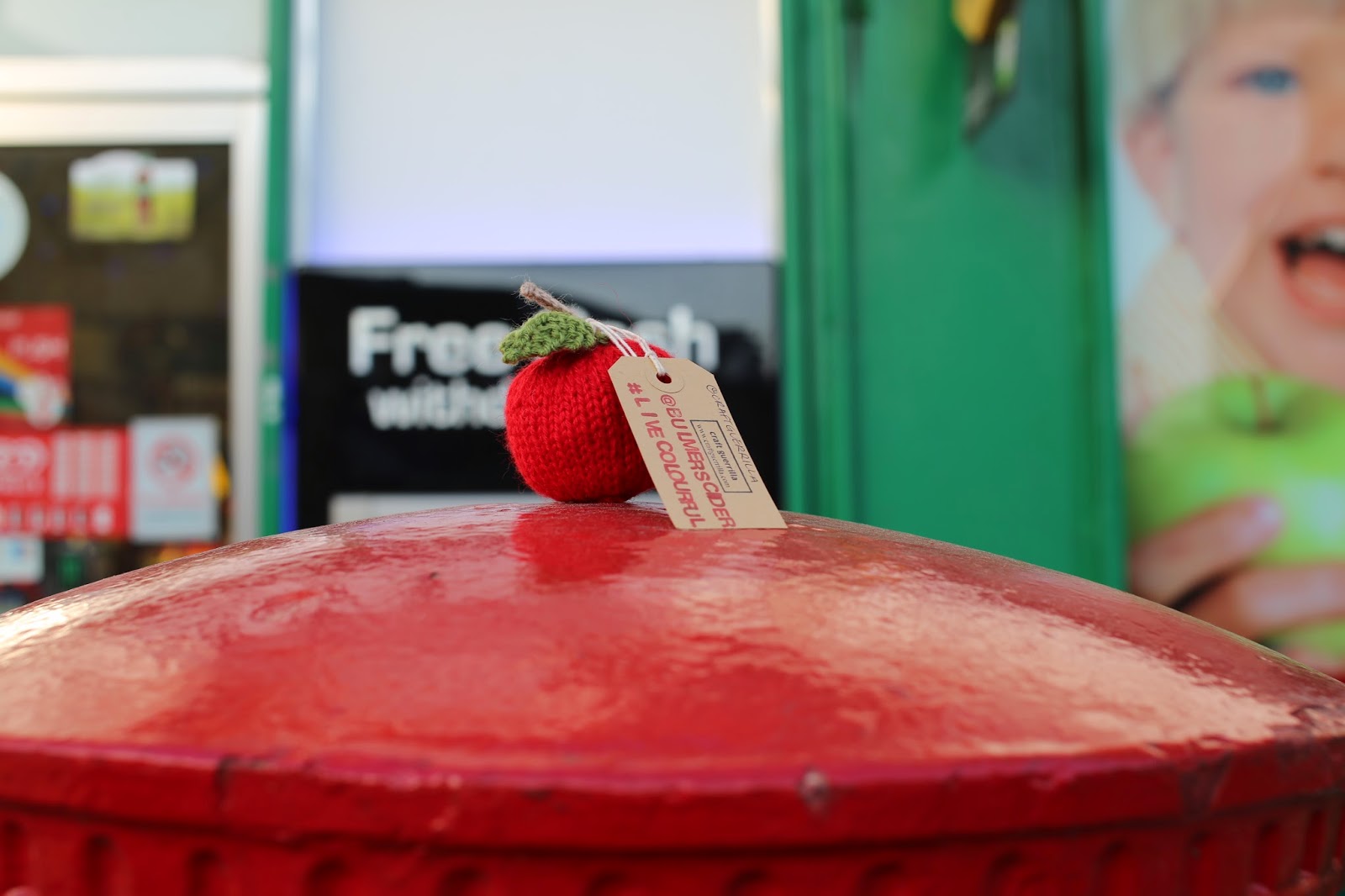 •To win a fantastic array of prizes add  a snap of your little apple on to Instagram or twitter but remember to hash-tag #livecolourful and you can tag us too (@craftguerrilla) to show us your handy work... we'd really love to see it!!!
If you'd like to see other people's yarn bombing you can check for the hash-tag #livecolourful or by checking out Bulmers twitter feed (@BulmersCider)...

Get your twitter handle on some tree cosies down at the farm...

If you'd like to win the chance to have your twitter handle added to Bulmer's knitted tree cosies which will be keeping the trees nice and toasty down at Broome Farm then get tweeting! Don't forget the hash tag #LiveColourful... and it's as easy as that!
The deadline for submissions is the 16th December.

The fantastic Lauren AKA Deadly Knitshade is the amazing artist who's adorning the orchards with her handy work!
We think she's amazing and you can see her in action here...


A little bit about Yarn Bombing// Yarn Storming// Knitted Graffiti// Guerrilla Knitting and what you need to know:

It's a form of modern graffiti which is mainly done to provoke a reaction in a nice, friendly and non threatening way.
There doesn't have to be a message or purpose behind it. Some choose knitting graffiti or yarn bombing as simply a means of creative expression though many individuals and groups across the world have adopted this art form as a way to protest against social injustices, world issues and so forth. Protesting through craft is also known as Craftivism. It's also a way of enhancing public spaces through non invasive, non damaging, non permanent urban art.

Basically we do it because we believe it's a gentle way to get important messages across as well as that it's great being able to add a touch of fun and colour to the world!

Though we encourage yarn bombing we also encourage our "bombers" to make items which people can take away so please remember to leave them within easy reach of people and also to be responsible... though yarn-bombing isn't illegal we'd like to remind people to use their common sense!

Yarn Bombing is less damaging then any other form of graffiti and if anything it makes us look at where we live and revalue our surroundings.
It can also bring communities together so if you fancy doing something on an even bigger scale get the word out that you're looking for knitters for a fun project. It's a great way to meet other people in your area and possibly make some more friends too!

One of the main reason in my opinion why it's not totally frowned upon is that removing these pieces of street art is simply done using a pair of scissors so they are considered and deemed as not as destructive as traditional street art.... so yes, we definitely want more of these fuzzy shenanigans happening in our beautiful but sometimes grey capital!
Lets face it London winters are dark so adding a little dash of colour is sure to raise a few eyebrows as well as a few smiles plus it's FUN!


What are the legalities and laws surrounding "Yarn-Bombing"?

Groups like Knit the City have done large scale projects without experiencing legal action and we've done some smaller scale projects too and we've never encountered problems with the law apart from a few smiles from the old bill up in Birmingham who request us to "not leave it there forever", which is fair enough!
So if you are driven to do your bit of yarn bombing please don't forget to check that your piece has been removed after a few weeks as it really doesn't look very appealing either if it gets all grubby, water logged and yucky! By not taking down your pieces after a reasonable time you'll then be adding to the "littering" problem and we really don't want that! 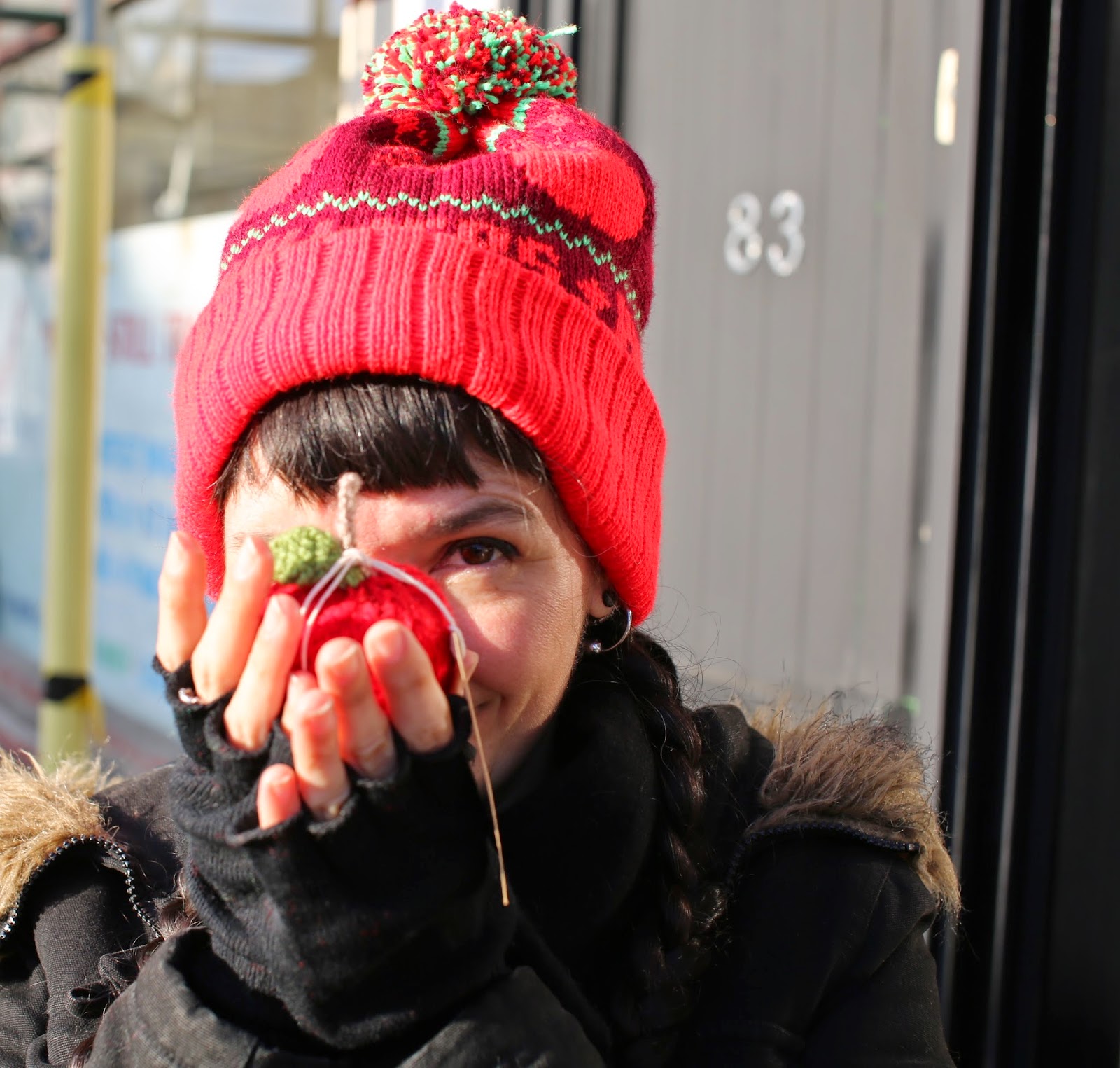 It's easy and don't get too hung up on your little apple being perfect or not... please don't let it stop you. We are believers that the actual act of making is as important as the result!

Please share your handy work with us, honestly we really want to see where you've been yarn bombing! Have fun and lets make this winter a little bit brighter!